Before I soldered the spars I had to solder a piece of brass rod to the upper nose - this represents the upper part of the frame in front of the observer - a machine gun mount and a folding split windscreen was fixed to this on the real aircraft: 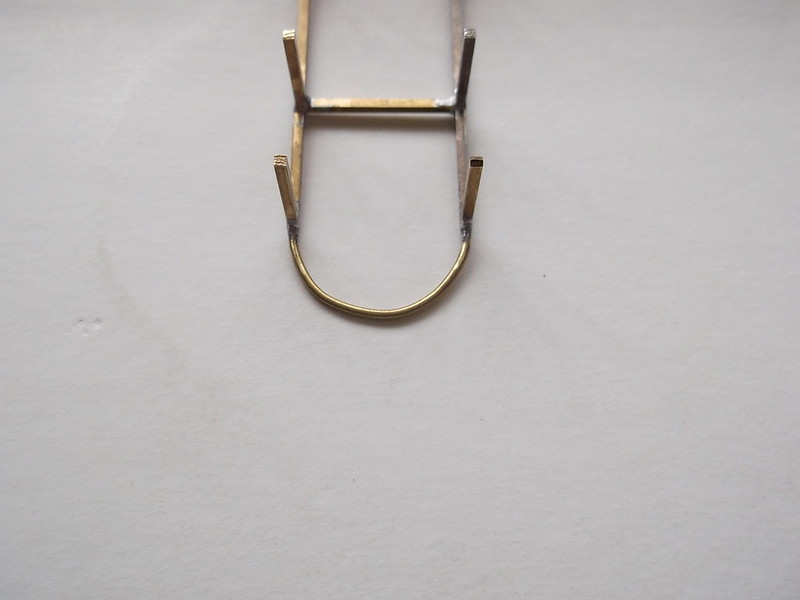 With this in place I proceeded to mount the spars. I put a rib on the ends of the spars to ensure that they were the correct distance apart and they could not move together or apart. I had carefully measured and marked the centres of both spars and these were lined fore-aft up as accurately as possible. The spars were placed on the bottom of the 4 vertical frames at the rear of the nacelle and the height of tips of the spars to the top of my desk measured - these had to be equidistant or the spars would not be properly aligned with the nacelle and one wing would be higher at the tip than the other. Minor adjustments were made until this was right. The the set-up was jigged so that the centres of the spars were in the centre of the nacelle frame, and that the spars could not move sideways or fore-aft while I wielded the soldering iron: 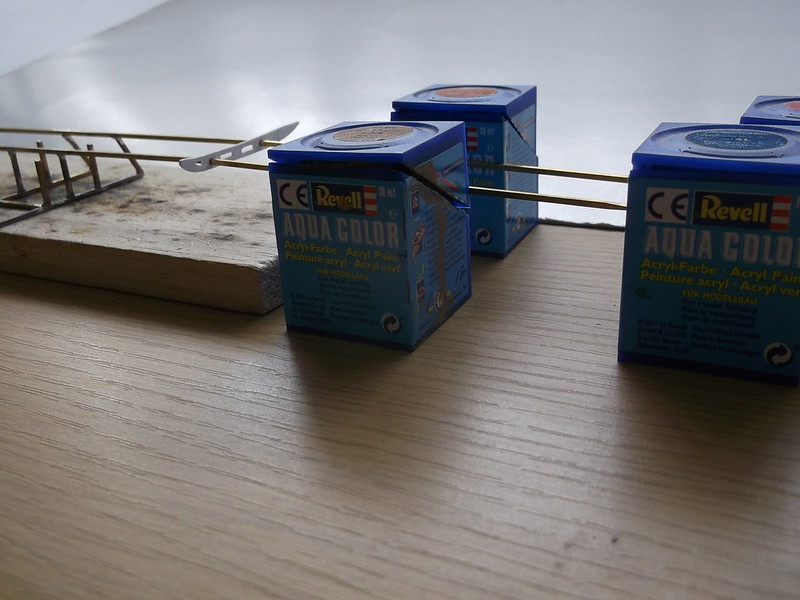 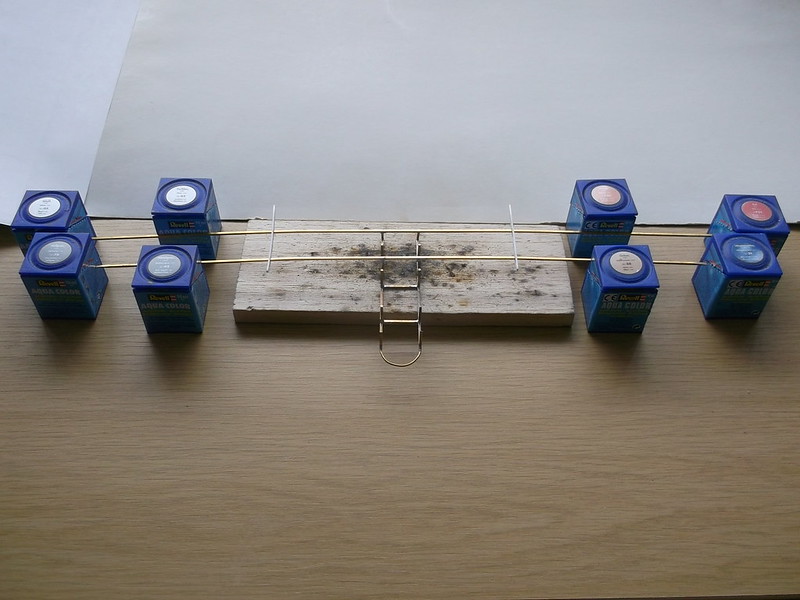 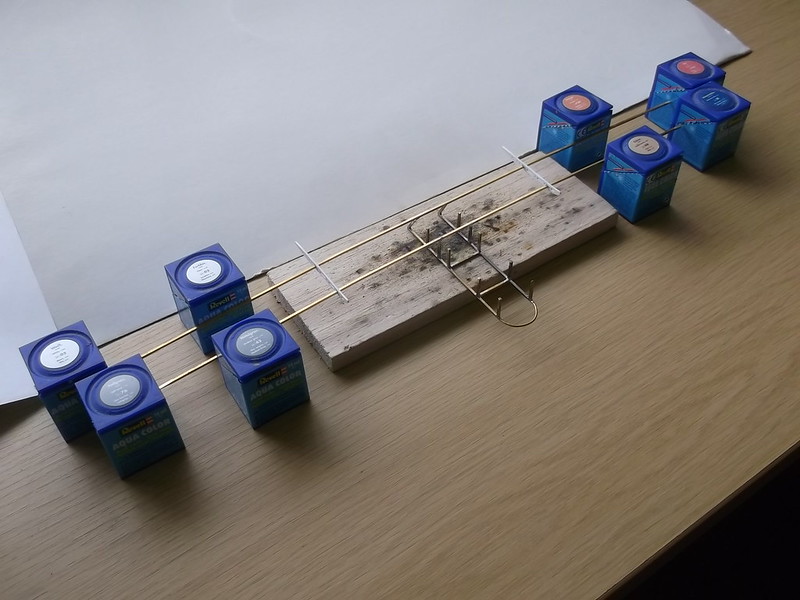 Having taken several deep breaths I proceed to solder and hoped that nothing moved while I was working. The result: 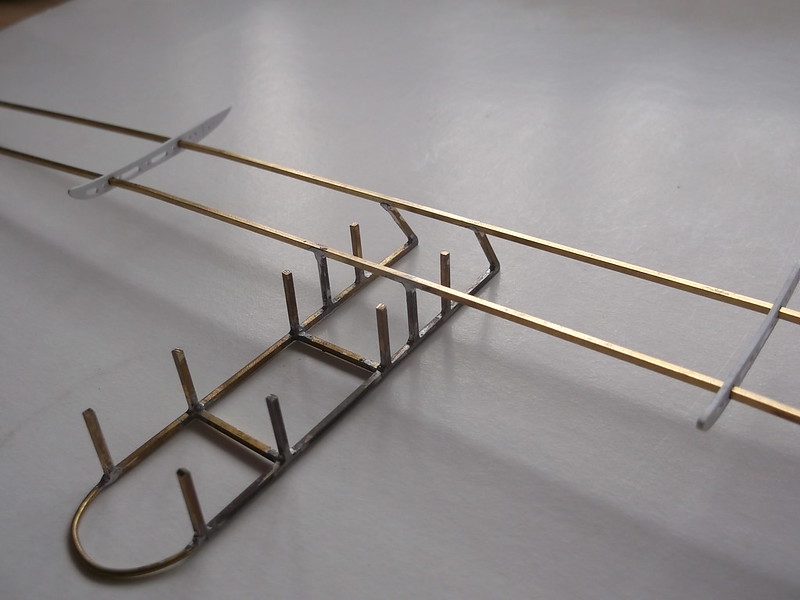 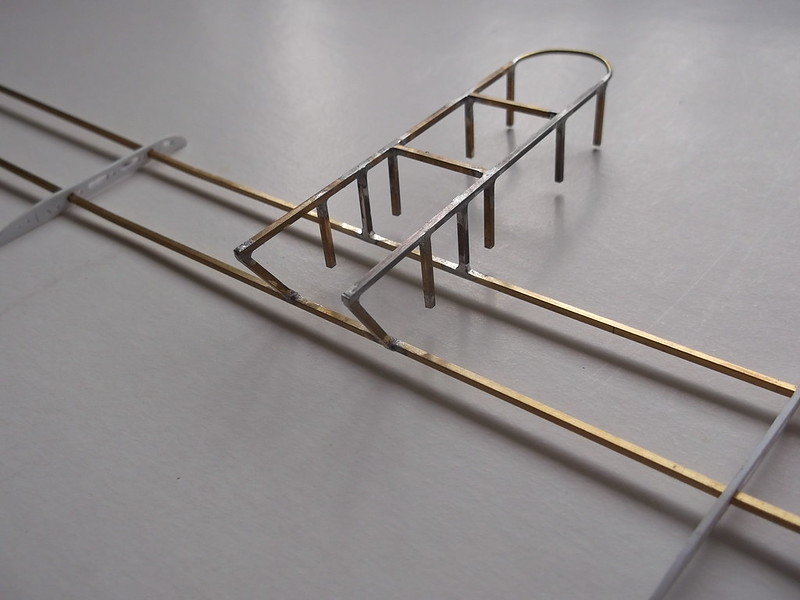 I have now got to write the instructions for the next stages of construction because I need to prime and paint the metalwork of the nacelle but do not want to prime the spars until later. This is that the ribs slide along the spars and strip the primer from the meta but I have to attach a rib flush to each side of the nacelle and these and the nacelle frame have to be painted first, and have holes for double lift wires drilled into them. I also need to consider carefully how and what to assemble inside the nacelle before i work on the wing ribs - which incidentally also have to have bracing wires. I intend to use my previous experience with the Gunbus, but some things are very different on this model and have not been fully worked out yet. However I am hoping that the next post will not be a bit quicker than the current ones.

I have had the great good fortune to be advised by another modeller (Dennis) on Britmodeller of the existence of drawings by W. Wyman of the DH 1A which have quite a lot of information about the cockpit details, (and from which the drawings in the DataFile were almost certainly copied). This means that I am now able to reconstruct something closer to reality in the nacelle. This has meant that I have had to make several alterations to the nacelle frame and other changes. At least I have this information at a time when I can use it constructively without having to conduct major surgery or start afresh.

The first change was to remove the vertical bar in the rear nacelle bay and replace it with a bar from plastic strip further to the rear. Before: 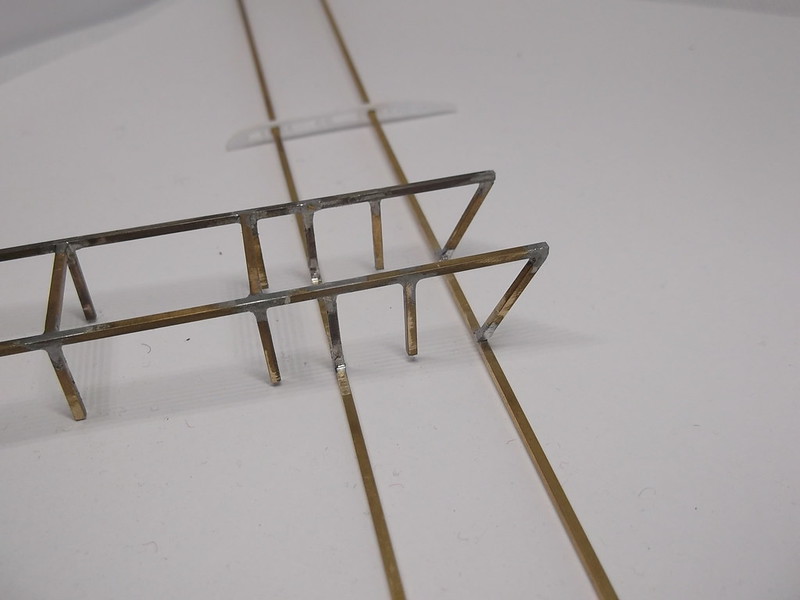 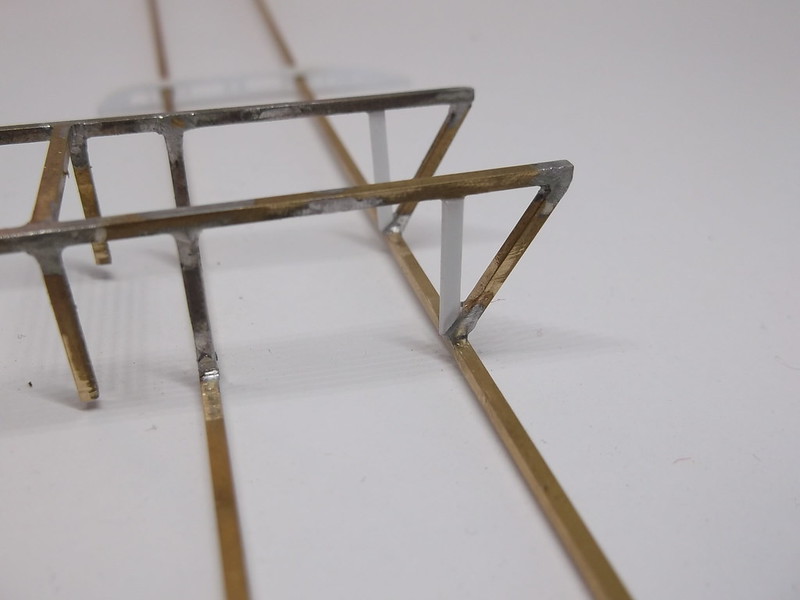 The bottom frames were also added from plastic strip, followed by the lower curved section in the front of the observer's cockpit. The vertical bar in the nose was soldered to the two half-rings: 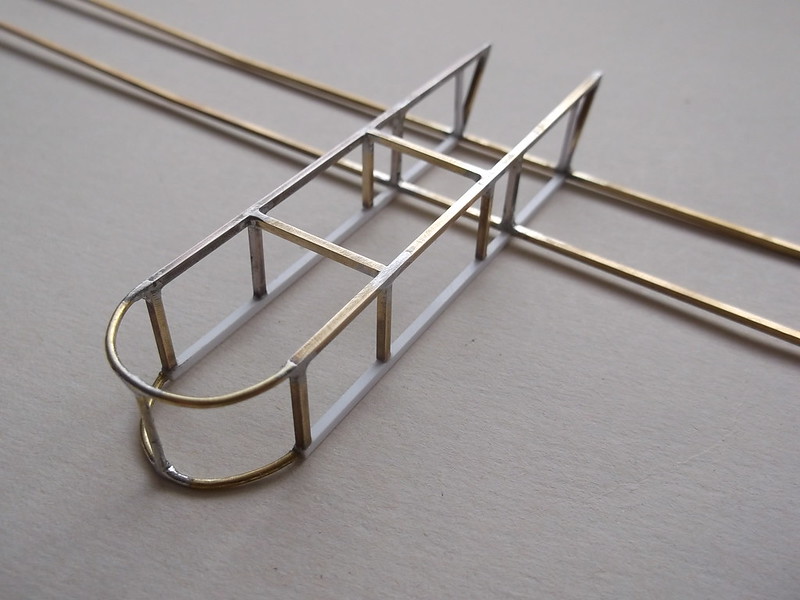 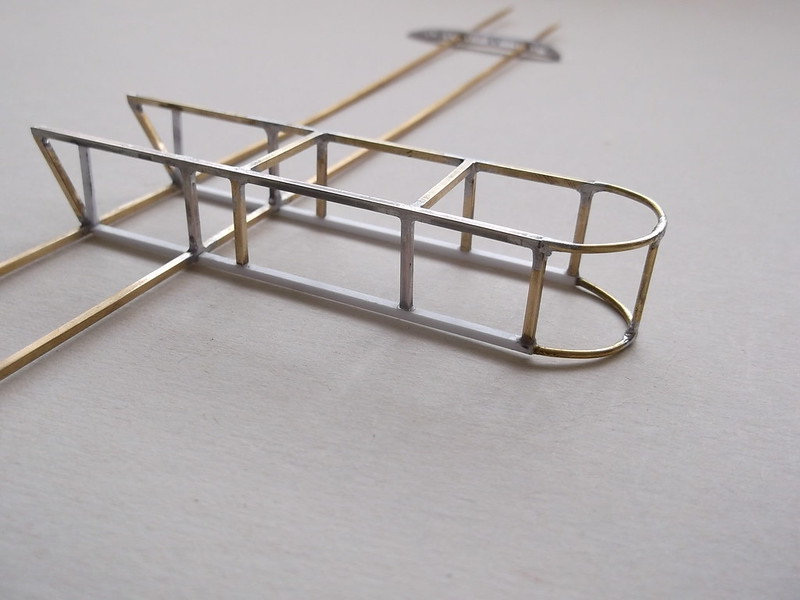 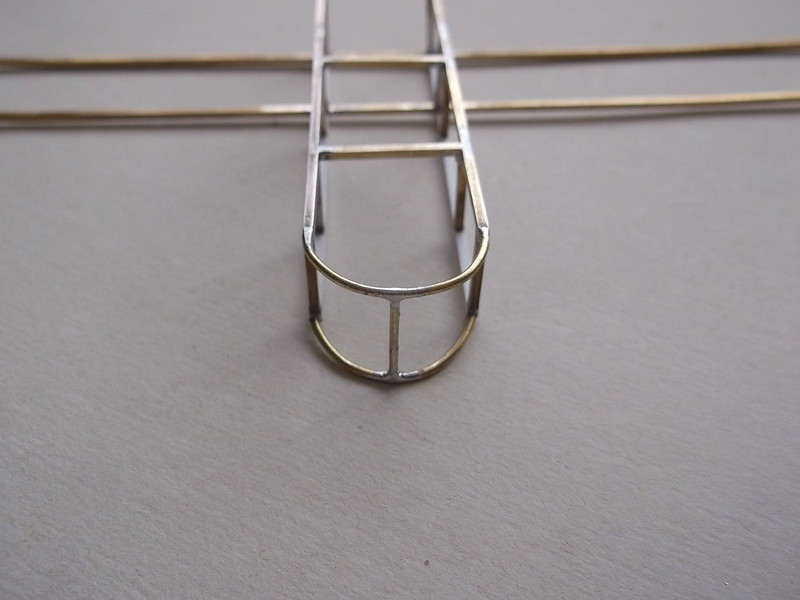 The metalwork was primed, and bulkheads fixed to the rear of the pilot's cockpit and between the pilot and observer cockpits. The remaining cross members of the nacelle frame completed this structure including two engine bearers in the rear. The frame was painted with acrylics and the bulkheads with oils - the latter were coated with Revell clear orange varnish when the oil paints were dry: 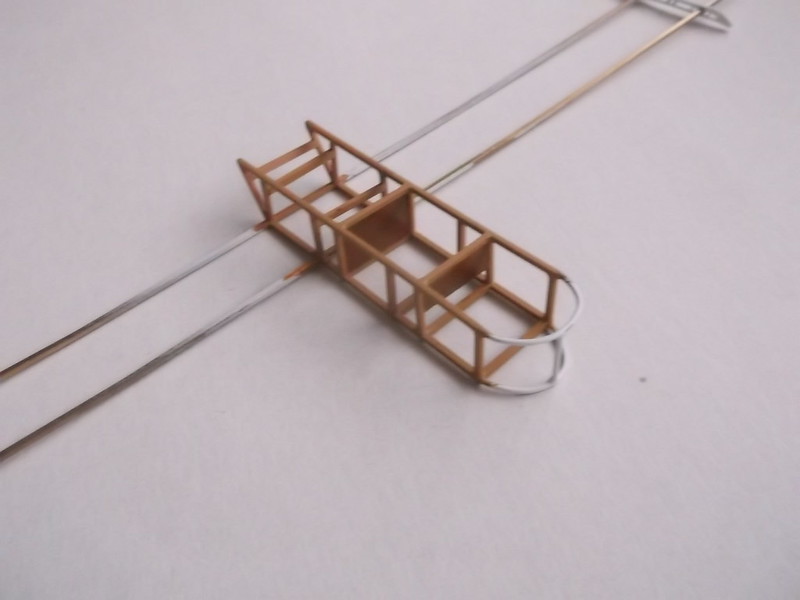 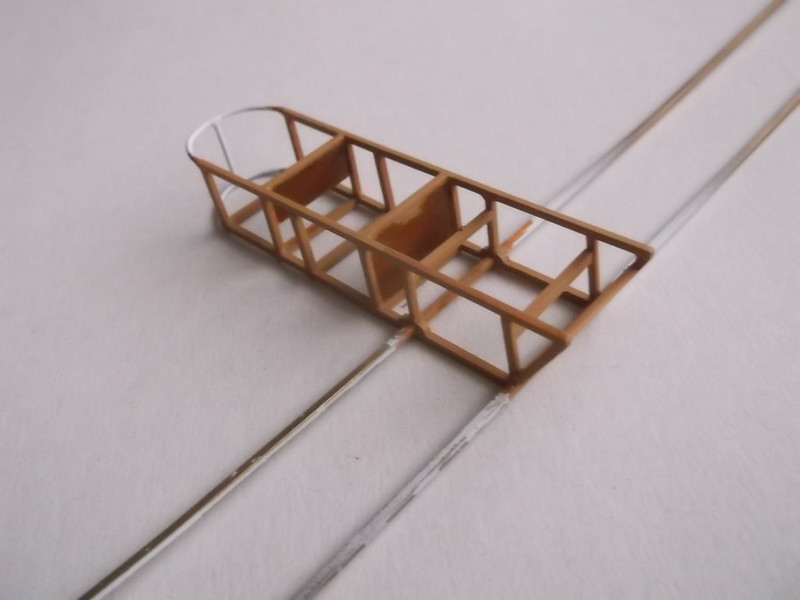 At last I should be able to start adding the internal details to the cockpits.